Life As The Fat Girl

When I gave birth for the first time, I was not a young naive girl with little life experience.  I was a 34 year old, educated, career-driven professional.  Yet, I was shocked at all of the things that NOBODY ever told me about.  Sure, everyone talks about labor pains and morning sickness and a bit about delivery …but I swear nobody ever told me about horrendous painful gas, hemorrhoids, hair loss, pooping on the table and other ugly truths nobody wants to admit.

But I digress, the title of this post is ‘Life As The Fat Girl’ …not ‘Child Birth Shockers’ … so let’s move on.  The point I was trying to make is this: There are some things people never talk about.  But maybe they should.  There are harsh and ugly truths out there in the world that real live people experience, and unless asked or unless it’s personal to YOU … it’s not something discussed.  I don’t know a lot about life as a black woman or discrimination against same-sex couples … so I will rely on others to share those truths; but for me, I DO know about life as a morbidly obese person.  So I will share.  Maybe I’ll share because if you’re not morbidly obese, you will read this and realize you do NOT want to go there.  Maybe I’ll share because someone reading this IS morbidly obese and can relate and realize they’re not alone. And there’s hope.  Or maybe I’ll just share because some people have no clue what life as the fat person is like.

Tidbits About My Life As The Fat Girl! 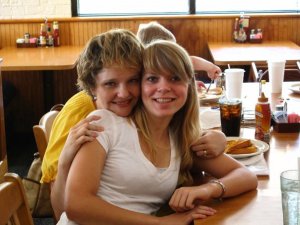 I no longer need to HIDE behind anyone – and happily take pictures with my beautiful daughter or anyone else.

8 thoughts on “Life As The Fat Girl”

Follow The Healthy Habit Lady on WordPress.com
Join 15,544 other followers