Posted on February 3, 2015 by The Healthy Habit Lady

Once upon a time, I had a dear friend and ‘mama mentor’ of sorts who called me Polly.  My name is Debra Sue, not Polly, but she called me that because she said I was a walking/talking modern day version of Pollyanna.  At that time; I did not even know who Pollyanna was, so of course I had to watch the movie.  Basically; she’s an eternally optimistic child, even in the midst of challenges … and she likes to play the ‘glad game’ and lift people’s spirits.  Okay, i get it – yeah, that’s kind of me.  Most of the time; anyway.  I am optimistic by nature and positive by choice.  I give people the benefit of the doubt.  I trust a lot.  I forgive rather easily. I am not easily offended. I am not overly sensitive. I am not very judgmental. I am not often jealous.  I definitely allow myself to feel my emotions such as anger, depression, etc. ~ but I usually choose not to STAY in those emotional states for too terribly long, obviously dependent on the situation.  However; with that, I can also have a short fuse and sarcastic tongue. Additionally; I am rather straight forward, blunt and to the point.  This can be a good thing and a bad thing for sure.  So you can call me Polly if you want, I don’t mind, I am generally a happy-go-lucky kind of girl.

HOWEVER … um … I am human.  I am female.  I am a mother.  I have my moments, geeze, don’t we all?  Did anybody in here watch that show Roseanne in the 80’s?  Yeah, sometimes I feel like I have a little Roseanne in me, longing to be let out and unleashed on some unsuspecting passive aggressive drama mama spewing her narcissistic garbage.  So in an effort to keep it real up in here, as I proclaim, and show you all that it is not always unicorns and rainbows and fairy dust blowing out of my butt; here are some random things that annoy me, in no particular order.

And now for your entertainment, here are some clips of Pollyanna and Roseanne.  The real trick will be trying to guess which one I am feeling like today.  Hmmmm….. 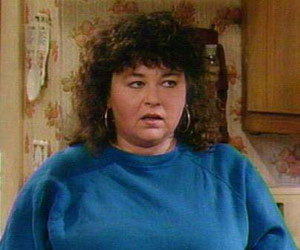 Follow The Healthy Habit Lady on WordPress.com
Join 15,543 other followers